Back to Latest Thinking

A Fearless Leader From My Neighborhood

If you’ve watched the “Won’t You Be My Neighbor?” documentary that was released this summer on the 15th anniversary of Fred Rogers’ passing, then you’ve experienced the deeply held respect people had for him and the fearlessness that characterized his relentless pursuit of a higher purpose. Mister Rogers’ approach to life represented a journey of making the right choices no matter what risks they presented or skeptics who might judge him.

For instance, Rogers demonstrated early signs of his ability to go his own way when he blended his unique training in music, theology and child psychology to create an unprecedented approach to children’s programming. While most with these credentials would have found themselves in a congregation, Rogers recognized the immense potential to nurture children’s self-esteem and their families with the growing popularity of television.

Mister Rogers’ fearlessness to do what is right no matter the outcome can inspire us to take a closer look at our own choices.

Mister Rogers ’ Neighborhood was recorded in my hometown of Pittsburgh, and it was there that his colleagues and audiences learned Rogers was a rule breaker in the best possible sense. “If you take all of the elements that make good television and do the exact opposite, you have Mister Rogers  Neighborhood,” producer Margaret Whitmer said in the documentary.

While other TV creators were bombarding children with senseless animation and fast-paced shows, Rogers combined pioneering techniques like candid talk, puppeteering and a slower speech cadence, so children could better understand some of the important topics he felt compelled to address like racism, divorce, the Vietnam War and Robert Kennedy’s assassination. These were courageous choices for children’s television. Choices made possible because Rogers dared to show his vulnerability with television audiences.

Rogers’ daring material was fueled by a firm belief in helping children develop effort and persistence—what many of us call grit today. And that meant a willingness and bravery to encounter failure and struggle. While Rogers’ fictional kingdom of make-believe allowed him to tackle real-world problems in a safe context for children, he faced his own daunting challenges like Congressional hearings. Rogers was asked to speak on behalf of PBS because it risked losing millions in federal funding. 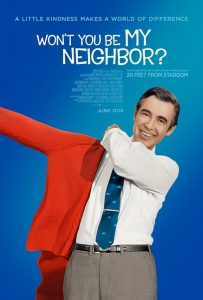 The documentary about Fred Rogers and his game-changing Mister Rogers Neighborhood, which first hit theaters in June on a limited release, has become the top grossing biodoc in movie history, and and the 13th best documentary overall.

If you’re familiar with Congressional hearings, you know they often feel like a foregone conclusion where the testimonies appear to be a courtesy rather than a genuine pursuit of the facts. Having participated in a Congressional hearing myself with other CEOs when I was at Prologis, I can imagine how Fred Rogers must have felt. A known adversary of television, Senator John Pastore presided over the hearings when Rogers presented his case.

While most would shrink under these circumstances, Rogers spoke with bold emotion and held Pastore to his responsibility of due diligence. Faced with a stoic panel and high stakes, Rogers chose to share the lyrics of a children’s song he wrote about managing anger. The skeptical senator surprised everyone by responding with, “I think it’s wonderful. I think it’s wonderful. Looks like you just earned the 20 million dollars.”

Many of Rogers’ life-defining choices to do right by children and their families were often made in the face of cynicism and great risk to his career, but those consequences appeared to be secondary as he moved through life opting for what was right instead of easy. What’s more, Rogers’ course of action wasn’t due to pressure from external forces or coincidence, but rather a fierce personal desire to reach families with transparent conversations in a caring light.

Rogers’ fearlessness to do what is right no matter the outcome can inspire us to take a closer look at our own choices. For example, consider asking yourself,

“Do I have the courage to make the right choices even when they’re difficult?”

“Do I have the courage to defend my beliefs?”

“Am I brave enough to show vulnerability?”

If you can begin to answer these questions positively, you have the makings of a leader who applies courage when it counts.

Jun 27, 2022 Forming Good Habits Key to Improving Your Company Culture Read More
Jun 20, 2022 The Great Resignation in the Age of Regret and What to Do About It Read More
Jun 13, 2022 The Surprising Story of the Founding Father’s Other Children Read More